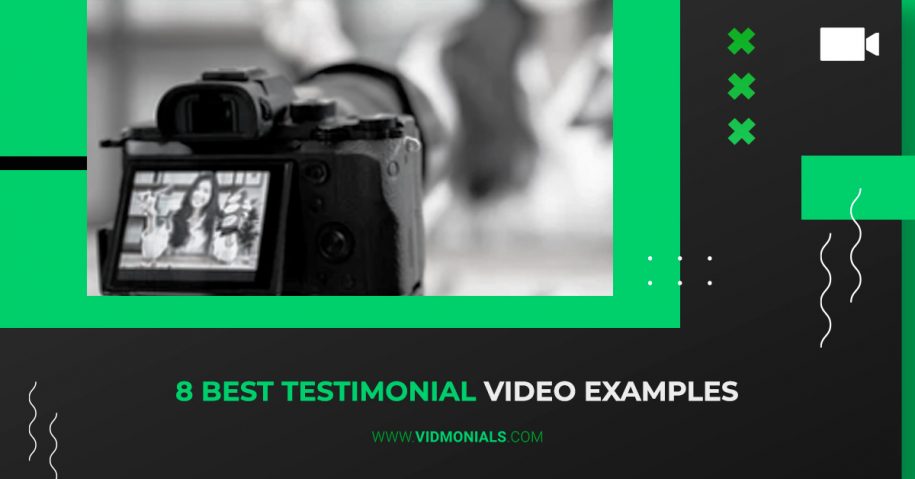 Posted by Muhammad Anees on August 9, 2021 | Featured | No Comments

Testimonial video examples help you create better video testimonials. Generally, these videos are from your most satisfied clients.

So, leveraging your consistent quality services along with the testimonial examples, you can create your own excellent video testimonials.

You can understand customer video testimonials as a video that showcases the positive experience that the customer(s) has had with the brand that they use. However, a customer video could also be about a company and its product.

You should always have a good look at one of the best testimonial video examples before coming up with your own. The reason is that video-based testimonials are essential when it comes to establishing a strong brand image amongst the masses.

Moreover, a significant percentage of the people, nearly 85 percent, look up to online reviews before turning into a customer.

Additionally, these stats are staggering!

So, it is definitely worth it to check the video reviews made by others, regardless of their industry.

Now, we’ll jump straight to the 8 best video testimonial examples which we have compiled for you. Read on below:

Making the video reviews can be tiring and exhaustive: cameras, lights, editing, sound effects, background effects, and whatnot.

Truthfully, all the hassle that comes with using a professional video setup is inevitable.

With that said, you don’t necessarily require a professional setup to make your customer videos. And this testimonial video is a prime example of it.

It is as simple as a customer review video can be and should be.

Nevertheless, the credit for the effectiveness and simplicity of this video goes to Vidmonials, a video recording software.

Using Vidmonials, the client is providing their testimonial by means of a single embedded webcam and microphone.

Thus, without a professional setup and the subsequent hassle, the video feedback is provided with flexibility.

Read More: How to Get Professional Video Review Service in 2021

While establishing a tone and connection is essential in the testimonial videos, making an emotional attachment is equally important. It is true, in particular for the remote video testimonials.

For a service such as Google Ads to make an emotional connection seems a little odd.

But this is one of the best testimonial video examples where you can do so without making your emotional connectedness appear forced and unusual.

Furthermore, this testimonial video does not focus on the service alone. Neither does it exclusively market how good the service is.

It explains the kind of success that a small independent, mom-and-pop kind of business had, using Google AdWords.

This is something that connects to all of us and affects us inevitably. And that is how it establishes an emotional connection with its viewers.

A common practice by companies is that they tend to use the success story of one client as much as they can.

However, such an approach reduces the effectiveness of a customer testimonial video when being used repeatedly over time.

This video from Dropbox is in total contrast to the above philosophy.

It is one of such (rare) testimonial video examples that uses testimonials from multiple clients.

So, the end result is a collage of different testimonial videos from different clients, which makes it more engaging and persuasive.

Yet, there is a catch: While the effectiveness of such videos is high, making them is not easier.

So, to make such videos, there occurs an inevitable need for relevant video recording software, such as the Vidmonials.

This video testimonial targets the theme “I choose Flexibility.” Additionally, under the same theme, it creates a series of videos.

Talk about the theme that uber presents: it is ingenious.

It smartly represents how Uber helps you make a living by also empowering you to pursue your ambitions, goals, or passion.

Such empowering videos are very relatable and establish a very solid connection at an emotional and personal level.

The theme for such a video series, however, needs to be very solid. So choose it wisely, and brainstorm much, for that matter.

This customer testimonial video from Samsung is one of the best examples of video testimonials that you’ll come across.

Samsung did not exactly make a customer review in this video. Rather, it serves merely as a channel, as a platform, to send home a very noble message.

That is smart, right?

The product is not being targeted here, and neither is the service. Only the brand is being used subtly.

It targets the subconscious mind of the masses and lets them believe that people with noble causes trust Samsung.

There are not many examples of video testimonials that target the brand directly. However, Tesla does this in this customer story.

The close-up shots. The unorthodox angles. Clean and crisper sound. All this already firms this video to be one of the finest testimonial videos.

And the customer is yet to deliver the testimonial.

As for the customer’s affirmation, it completes the job more than just fine.

Conveying the most while using the least amount of words is what marketing thrives at. This testimonial video is an excellent example of it.

This customer review video from Codecademy is under a minute, yet it still conveys the most. It urges the use of the brand in a fine way.

Besides, it precisely describes the customer’s story. The result of which is an effective customer testimonial video.

The last on our list is the search engine giant Google. However, it is definitely not the least.

Interviewing the current employees to make your brand image stronger and depicting it as the right place for employees? What is that saying: kill two birds with one stone.

In “What’s it like to work at Google?”, Google enlightens people about its workplace environment and culture.

Furthermore, it also shares its workforce’s emotions towards Google as a company.

Such testimonial videos share that the company not only cares about the customers but for its people as well, who work tirelessly behind the scenes.

A client testimonial video is the one that enables a company/ business to share the experience of its most satisfied customers using its services/ product.

It is clear from the testimonial video examples in this article that a customer video review should be a combination of various inspiring elements.

And the examples shared here from the top companies and brands showcase the same.

Lastly, as discussed earlier as well, you require a tool to create professional videos.

Vidmonials can help you create compelling videos of your customers’ testimonials. So, book a demo here to learn more about it.